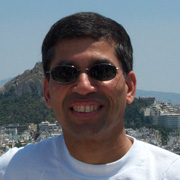 Areas of research: Gene regulation by microRNAs; PcrA helicase-DNA interactions. Our laboratory is studying the mechanism by which the human papillomavirus (HPV) oncogenes alter cellular microRNAs as well as how these miRNAs regulate the expression of their target genes. We have found that several miRNAs such as miR-218 and miR-363 are targeted by the HPV E6 oncogene. We are now investigating whether E6 alters the DNA methylation and/or chromatin structure in the promoter regions of the above miRNAs, thereby altering their expression. We are also identifying the cellular targets of the above miRNAs using gene expression profiling and proteomic analyses. We are also studying the role of the PcrA helicase, which is essential for the growth and survival of Gram-positive organisms, in cellular DNA metabolism. We have shown that PcrA can displace the RecA protein bound to the DNA and block DNA recombination in vitro. We are currently testing the hypothesis that the essential cellular function of PcrA involves the resolution of blocked recombination intermediates and/or stalled replication forks. In a collaborative study with the Leuba laboratory, we are also carrying out single-molecule studies dealing with the movement and interactions of the various PcrA domains during its translocation/helicase activities.