Blinded by the light

Blinded by the light: Activating gene editing in fish with light

The Deiters group installed photolabile “cages” in the protospacer region of the gRNA that block target DNA binding until “decaged” with 405 nm light. Controlling CRISPR-Cas9 function by installing caging groups in the gRNA has become a hot field, with several independent groups publishing on the topic recently. Optical control allows for spatial and temporal restriction of gene editing that can be used to reduce off-target editing and to study gene networks in a developing animal. They are also working on applying this technology to other CRISPR-based tools to develop optical control of base editing and RNA editing. 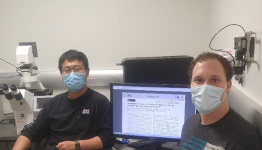